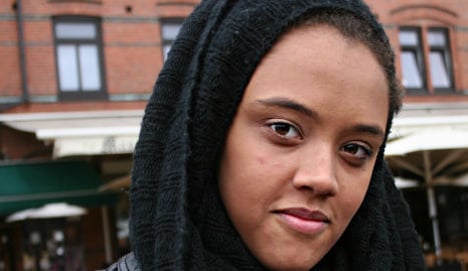 Amie and other Malmöites spoke to The Local at Sunday's huge demo. Photo: Patrick Reilly

Malmö’s Möllevångstorget is usually pretty quiet on a Sunday as the market traders take a day off. March 16th, 2014 was no ordinary day of rest as the square was buzzing with activists and bystanders, who swarmed the area for the demonstration on everybody’s lips.

Seven days earlier, a smaller demonstration against fascism was held in the same location, which attracted 1,000 people. Significantly more packed the market square a week later in large part motivated by events, which occurred barely a stone’s throw from this part of Möllan, the previous week.

Exact details remain unclear and those in attendance have offered differing accounts. What is beyond doubt is that a 25-year old man, Showan Shattak, was left critically injured after being stabbed following a fight.

The Party of the Swedes (Svenskarnas Parti – SvP) subsequently issued a statement where they appeared to take responsibility for the incident.

Shattak, who is well known for his work to stamp out homophobia among football fans, was a major presence in Möllan from his hospital bed. His face appeared on numerous flags and supporters sold t-shirts bearing his name for 100 kronor.

“I’ve known Showan since childhood as we went to school together from the first until the ninth grade. It was very shocking to find out that he had been attacked and ended up seriously injured,”Alexander Khadhraoui told The Local as he braved the rain pelting down in the square.

Khadhraoui’s friend Stefanie Andersson added chillingly, “I think the Nazis who attacked him knew who he was. They wanted to kill him.”

The assault on Shattak, who was among four people injured, is the latest in a long line of incidents in Malmö involving the extreme right.

While the city may have enjoyed some limelight due to hosting Eurovision and its increasingly trendy image, it has been dogged by anti-Semitism claims while a teenage Social Democrat politician was assaulted after giving a speech on immigration.

For many, the attack on the popular Shattak was the final straw, prompting activists to stage one of the largest demonstrations ever in the city.

IN PICTURES: Malmö demonstrators tell The Local why they are marching

Even the Skåne County police said they had never seen anything on this scale before, while local newspaper Sydsvenskan said 10,000 people showed up for the demo which lasted from 2pm until well after the sun went down.

“Fascism is growing and you can see it historically. It grows when there is high unemployment, welfare cuts and workers from different countries are competing for the same jobs. The whole social situation factors into fascists expressing these actions,” Lars Flysjö, spokesman for Skåne against racism, which organized the demonstration, told The Local.

The SvP may have taken responsibility for the attack but Flysjö argued that they are but one part of a larger fascist movement.

“What we are seeing now is part of a broader movement that is connected and associated with other Nazi attacks. They have been threatening people who don’t agree with them and are on the offensive.

He added; “They are part of the same wave of fascists in the shape of the Nazis.”

Among the political parties that participated in the protest were the Left Party, who dished out free vegan hot dogs, while Feminist Initiative (Fi) and the Communist Party of Sweden were also well represented.

Copies of the Proletären newspaper were handed out as protesters were warmed up by a soundtrack of Neil Young’s ‘Rockin in the free world’ and The Animals’ ‘We gotta get out of this place.’

The march went from Möllevångstorget into the heart of the city centre and then back again. In general the atmosphere at the demo was cordial, in marked contrast to the violence after the International Women’s Day demonstration seven days previous.

A police officer told The Local that the event had passed without major incident and it was obvious that the authorities kept a deliberately low profile. For many, the highlight was hearing that Shattak was improving after his life had hung in the balance.

“He is awake and they have taken down the respirator. He spoke to his brother in the hospital so it is encouraging,” protester Stefanie Andersson told The Local.

But for all the positive noises emanating from Möllan there was a less appetizing reaction to the stabbing pasted on a nearby signpost. On it was a ‘Wanted’ sign complete with picture, personal number, address and phone number of one of the alleged perpetrators of the previous week’s violence.

‘The problem is fascism, the solution is action’ was written on one of the many banners on display.

The brutal attack on a popular local has brought Malmö together in a show of solidarity but also revealed the potential for vigilantism.