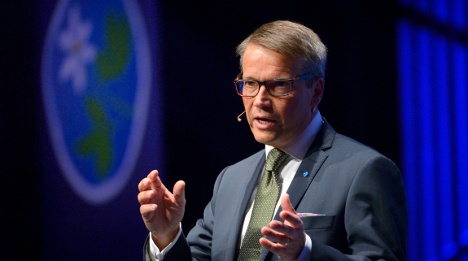 "During the time the party has existed, Sweden has been perhaps the most materialistic, individualistic and, well, yes, family-hostile country," party leader Göran Hägglund wrote in the Christian newspaper Dagen. "The debate climate is strongly marked by this and it's therefore not strange that we have often had to fight against the tide of opinion."

The text also looked back.

"In the sixties, Christianity was to be thrown out of the schools. Recently, we've had to put up a strong fight to have ceremonies at the end of the school year take place in church," Hägglund wrote.

"He looks back quite a lot," noted Magnus Hagevi, associate professor of political science at Linnaeus University. He felt Hägglund's attempt to tie the party's founding ideals to the work ahead was tenuous.

For example, Hägglund wrote about the need for politicians to make ever more complex moral decisions.

"We know that globalization will put great pressure on the welfare system, and therefore also social cohesion," Hägglund wrote. "Advances in science will make many things better, but will also demand political decisions about advanced moral questions."

The text did not address the party's well-documented internal tension.

"As a small party fighting for survival, the Christian Democrats has tried to broaden its appeal, but it has led to three strains in the party," Hagevi explained.

Those three, at times at-odds, factions are: The old-school evangelical church-goers; the more liberal members like Göran Hägglund himself who draws influence from a continental philosophy about Christianity's right to influence politics; and finally, the disgruntled conservative voters who have abandoned primarily the Moderate Party, but are more old-fashioned than they are religious.

Ideological in-fighting combined with the party's failure to find a core policy platform to stand on could mean it risks its presence in parliament and in government, Hagevi noted.

"They need to present more well-prepared proposals," said Hagevi, who noted that the most successful smaller parties were all associated with one key issue.

"The Sweden Democrats, immigration. The Greens, the environment. The Left Party, no privatization. The Liberals (Folkpartiet), education… well, so far… but the Christian Democrats and the Centre Party have failed to find their issues."

The two latter parties are also the ones that regularly sink below the four-percent barrier in opinion polls.

Hagevi said that the party had not capitalized on the weakness of the Social Democrats (which has strong support among first and second-generation immigrants) in the late 1990s to scoop up socially conservative but non-Christian voters. But he also understood why they hadn't put their back into it.

"If they try to broaden the party further the risk is that they lose their core, and their core voters," he said of the evangelical strain in the party, who in such case may abandon it altogether.

"And then the party would really be out on thin ice."