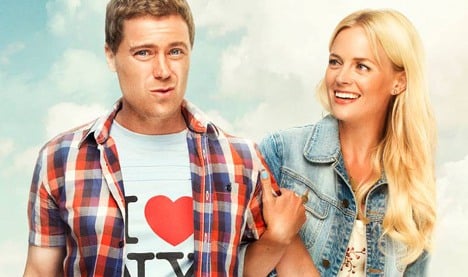 Photo: TV4
Time flies when you're making a TV show. Just ask Greg Poehler (yes, the brother of Parks and Recreation star Amy Poehler, let's just get that out of the way.)
Two years ago, he had the idea of writing a script about his experiences over the past seven years since he moved from the US to Sweden as a "love refugee". On Friday night, at 9.30pm on TV4, the dream becomes a reality – with Poehler as the star of the show, which promises cameos from his sister, Will Ferrell, and a stellar Swedish cast.
So how is the 39-year-old feeling ahead of the premiere?
"Well, I didn't sleep last night if that's what you mean," he tells The Local.
"Mostly, I'm just excited for people to see all the episodes. I think we created a show that's unlike any on TV – one with funny moments, but also sweet and sad moments as well. And it evolves quite a bit over the first season."
Indeed, while the show will be a brand new experience for many of the viewers, a select few have already had a sneak peek after a red carpet screening in Stockholm this week, which saw peals of laughter from the audience and no doubt sent a pang of nostalgia through fellow expats and love refugees who have taken a similar journey.
The only thing that raised an eyebrow among some viewers were the stereotypes, especially as Poehler had said before in an interview with The Local in December that the writers had purposely chosen to steer clear of the clichés.
When quizzed on this again on Friday, Poehler defended the crayfish and the saunas.
"Some of the critics I've read seem to be hung up on the fact that episode one has lots of stereotypes/clichés," he says.
"But I'm not worried about that. The rest of the season has hardly any. We obviously had to establish early that the show is set in Sweden and,  I'm not sure if you've noticed, but Swedes do in fact love crayfish and saunas."
Indeed, with a premiere date for the US soon to be announced, a sauna scene or two can be forgiven.
As for the premiere, Poehler himself won't be watching from home.
"I'll actually be in the audience at Let's Dance. I'm doing a bit on there promoting the show. Not sure if I'll be dancing, but bringing my ballet slippers just in case," he says.

JOBS
‘I’ve built a career around making jokes to Swedes about themselves’
MUSIC
Lenny Kravitz lets it rip on stage in Sweden
Url copied to clipboard!