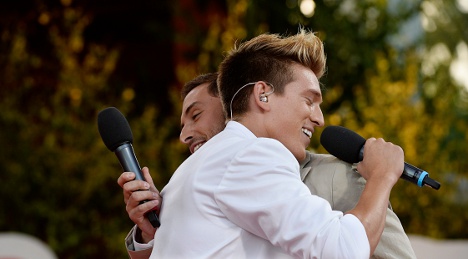 Swedish entertainers Danny Saucedo and Måns Zelmerlöw are HFF now. File: TT
In France, they kiss you on the cheek. In Maori tribes of New Zealand, they nuzzle noses. And in Sweden, they hug. A lot.
And it's all a bit confusing for me, especially as Swedes usually enjoy their privacy. In fact, besides the liberal attitude to nudity (yeah, that's a real thing here), the hug is probably the biggest eyebrow-raiser among weird Swedish habits.
But first, in case you're unaware, here is how The Hug works in Sweden.

1. Meet a person in Sweden in an informal social context. Housewarming parties are a good and commonly recurring example.

2. Say your name once and allow them to say theirs. Repeat process with every single person in the group, even though everyone heard your name the first time. Optional hand shake, single pump. Men and women shake hands too, by the way.

4. When you leave, hug any person you talked to for more than five minutes. They are now a Hugging Friend Forever (HFF). Wait while everyone else hugs everyone else too. This may take a while if several people are leaving the party at once.

5. Hug your Hugging Friend every single time you see them again in any vaguely social context. In fact, pretty much in any context.

6. And then hug them goodbye each time too.

Note: Never go for the cheek kiss. It's not even an option. People will panic.
This list might sound like an exaggeration but this is exactly how it works.
I recently went to a colleague's house for dinner and we hugged when I entered his house. We hugged! It was only a few hours earlier that we'd been chatting about Zlatan Ibrahimovic in the office and now we were cuddling in his corridor.
Swedes even send virtual hugs via text message, signing off their SMSs with a 'kram' (the Swedish word for hug).
But me, I just can't get used to the hugging, especially with other men. I still go for the handshake every time and people recoil. It's become so bad that I have a reputation among my friends as a non-hugger.
“Will it be a hug this time Oliver?” they say as menacingly as a Swedish accent allows.
In Australia, where I'm from, we prefer the handshake. Strong grip, eye contact, two to three pumps. But it's always a hug in Sweden – men on men, women on women, men on women and so on.
And I'm not the only foreigner in Sweden who has noticed. A French woman I know also finds it hard to get used to.
“But it's not that they hug that I find strange… it's the way they do it,” she told me recently. “It looks like they hate it, as proper Swedes they don't like human contact. There is always this awkward panic moment in their eyes: 'Warning! I'm about to enter in collision with another human being',” she said.
Let's not forget, in France they kiss as a greeting. So who knows whether we can trust the French woman to judge strange greetings.
“You start with a different cheek depending on the region you come from, and the number of kiss varies from two to four,” she explained. “It's a real art.”
A real art indeed. Like embracing the hug, perhaps?
READ ALSO: Should expats in France do a greeting kiss?
This article was written in 2014.