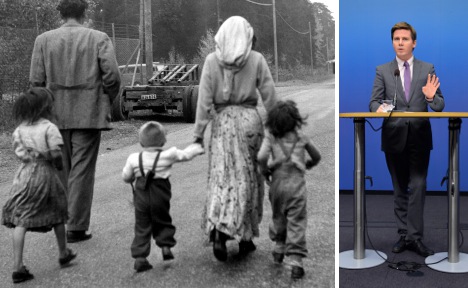 A travelling family evicted from Mälarhöjden in 1951, and Erik Ullenhag. Files: TT

"This is an unknown and dark part of Swedish history, maybe even darker than what I thought when we started the work with the white book," Swedish Integration Minister Erik Ullenhag wrote in the op-ed pages of the Dagens Nyheter (DN) newspaper.

The white book is based on interviews with Roma and other traveling groups, plus archive material and independent research.

"When the country's police at the beginning of the 1900s described Roma and travellers the answers were clear," Ullenhag wrote. "'Ugly', 'unreliable', 'and 'good-for-nothings' were common views."

That perception, Ullenhag wrote, laid the foundation for an attitude that the Roma contributed nothing and should be "annihilated".

As the report was readied for release, Ullenhag told the TT news agency that the white book would have recognized the many stories of abuse shared by Roma and travellers.

"We have a heritage of prejudice, and the racist and xenophobic currents in Swedish society, in particular the first half of the 1900s, still exist today," he added.

"But today they are not (expressed by) the authorities but by racist websites," the minister said, before concluding that Roma and travellers were among the most vulnerable groups in Sweden today.

Ullenhag said he had met many people who chose not to wear traditional dress.

"(They) are still not open with their identity as Roma or traveller because many are scared of the reactions," he said.