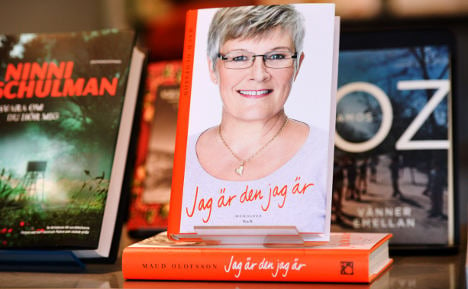 Maud Olofsson's autobiography 'I am who I am'. File photo: Leif R. Jansson/TT

Sources told local media on Tuesday that Maud Olofsson would not be questioned by the parliamentary committee on constitutional affairs (Konstitutionsutskottet – KU) over the state-owned energy giant Vattenfall buying the Dutch company Nuon in 2009. The deal led to significant losses for Swedish taxpayers when Vattenfall wrote down its assets.

Olofsson has reportedly said she would not attend the hearing for questioning,  which drew scorn from her former opponents.

"Maud Olofsson is sabotaging the committee's work, which in itself is serious. Furthermore, what has she got to hide?" Social Democrat MP Morgan Johansson tweeted.

Last year, after the asset write-down, Sveriges Television (SVT) reported that Vattenfall had been warned that such a deal may not add to its long-term value. Management consultants McKinsey had concluded that "a bigger buy would entail risk and would not create value per se".

The McKinsey report further stated that the deal meant Vattenfall may have to ask its owner, the Swedish state, for additional funds. Maud Olofsson has remained steadfastly taciturn about the deal but told SVT she tried to persuade Vattenfall 'to calm down' its expansion bid.

On Tuesday, the TT news agency reported that MPs who sit on the constitutional affairs committee would be discussing how to deal with Olofsson's refusal to answer their questions. Her chief policy advisor Elisabeth Thand Ringqvist has also said no to being questioned.

If Olofsson was still in government, she would be breaking the law by not showing up. The fact that her top aide said no has raised eyebrows, including those of committee chair and Green MP Peter Eriksson.

"For a minister who has resigned there is not obligation to come, but I don't think it's ever happened that a chief advisor has been called but not turned up," Eriksson told the Svenska Dagbladet newspaper.