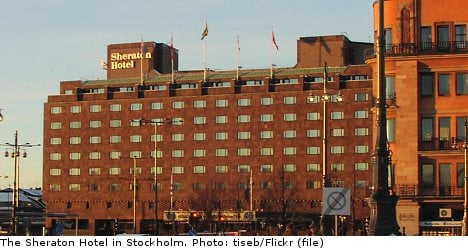 Diana Nyman, the chairman of the Roma Council in Gothenburg, was forced to drink her coffee in the lobby of Stockholm's Sheraton hotel after staff stopped her from entering the breakfast lobby.
Nyman was on hand on Tuesday at the expense of the government to speak at the release of the white paper on discrimination of Roma and travellers in Sweden.
She was staying at the four-star Sheraton Hotel, a stone's throw away from parliament and the government quarter, but when the 45-year-old went down for breakfast she was offered a modern-day example of the discrimination that the white-paper on Tuesday admitted had been endemic in Sweden.
Nyman, who wears a traditional wide black skirt and frilly blouse and who recently fielded questions about beggars in an online chat, said she was almost knocked over by a staff member who rushed to bar the Roma expert and speaker from entering the breakfast room.
After a conversation with the Tomas Johansson, the managing director of Sheraton, Nyman told the TT news agency that she did not feel she had been given an apology.
"It was a very eye-opening conversation where he told me that his staff were sad and upset about what happened. I was very upset," she explained.
"I was picked out like a scrounger, but the managing director's explanation was that I got a special offer to order my breakfast instead of going and picking it from the buffet, and that I was able to drink my coffee in the lobby. But there was no one else sitting in the lobby drinking their coffee," she said.
Johansson told The Local via email on Tuesday that the company was launching an internal investigation into the matter.
"We apologize for any inconvenience and embarrassment that this has caused Ms Nyman. Please rest assured that the hotel does not tolerate any discriminatory behaviour," he added.
Nyman said she'd intended to report the matter to the Equality Ombudsman (Diskrimineringsombudsmannen – DO), the state's equality watchdog.