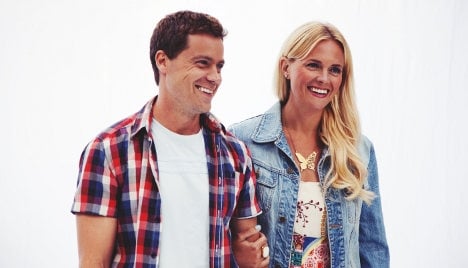 Greg Poehler in a scene from Welcome to Sweden. Photo: David Einar/TV4
Welcome to Sweden will premiere in the US on Thursday July 10th at 9pm, as part of NBC's comedy summer line-up.
The news was well-received by Poehler himself, the younger brother of Parks and Recreation star Amy Poehler.
Obviously it's a dream come true to be on NBC," he told The Local on Thursday. "But more than anything, it's further validation that we made a show that people like and are responding to – both in Sweden and the US."
The former lawyer told The Local in an interview in December that having the show broadcast in the US could only be a positive sign for Sweden and Swedes in general.
"I think the world is ready to laugh with Sweden," he said. "I'm hesitant to say I want the world to laugh at Sweden… Sweden is coming out pretty well in this."
"The show is like a postcard of Stockholm at its best. The weather is incredible, the sun is always shining… Sweden has this darker reputation with all the Bergman films… perhaps it's deserved, I'm not sure. But my plan for season two is to have an all­-winter, all-dark season to show the other side of it all."
The first episode of the show was released to popular acclaim in Sweden at 9.30pm on TV4 with 1.7 million viewers.
The second episode (trailer below) will feature a cameo from US mega star Will Ferrell.
The show also features Swedish stars Josephine Bornebusch, Lena Olin, and Claes Månsson.