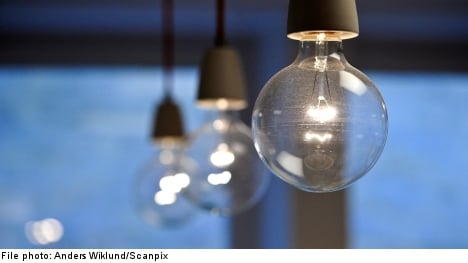 The figures released by electricity supplier Telge Energi revealed that the average bill for the December to March period was 4,300 kronor ($664) lower for homeowners than the bitter winter of 2010.

"We are noting one of the lowest March prices in ten years, just 0.22 kronor per kWh," Telge Energi said in a statement.

It's a stark contrast to December 2010 when it was reported that the spot price for electricity had reached a record average 0.83 kronor per kWh. The Swedish electricity market was deregulated in 1996, with figures being compiled on what Swedes are shelling out for power ever since.

The company added that the mild winter and higher than normal precipitation have contributed to the cost savings. Prices for household fuel such as coal have also dropped.

The lower figures are particularly good news for home owners with variable contracts reported the electricity supplier. Indeed, the energy prices for March 2014 are 56 percent lower than March 2010.

With the mild winter now a thing of the past the weather looks set to improve over the last weekend of March. Weatherpal reported that temperatures will reach up to 15C with plenty of sun across the country.

"Saturday will be like Friday with sun, warm and continuing mild breezes. However in the Lapland mountains there may be some more clouds and snow," said Weatherpal meteorologist Lisa Frost.

She added that there will be "spring weather" for most of the rest of the country to savour.

In the capital it is expected to peak at 11C with plenty of sun on Saturday with Gothenburg expected to enjoy up to 14C with similar temperatures forecast for Malmö.