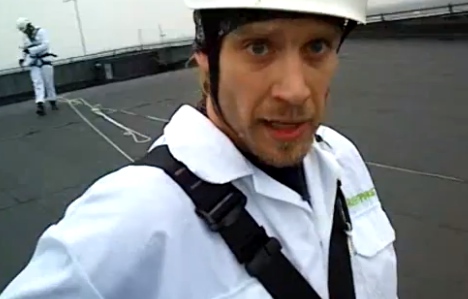 Greenpeace activists on top of an Oskarshamn reactor. Screengrab: Greenpeace
The whopping bill was the result of several thousands people being prevented from doing their jobs as well as extra surveillance and controls, according to OKG CEO John Robbins.
Robbins told the local Oskarshamnstidningen daily that the firm had still not decided whether to seek damages from the 24 Greenpeace activists, all of whom are currently under investigation on suspicion of trespassing related offences.
Some 20 activists breached the site of the nuclear power station at 7am on Wednesday March 5th. The activists managed to climb onto the roof of one of the reactors by scaling three sets of fences with a ladder.
All 20 are now suspected of aggravated breaking and entering, with an additional four suspected of aiding and abetting the breaking and entering of the premises.
Despite the breach of security at the plant, Sweden's Radiation Safety Authority (Strålsäkerhetsmyndigheten – SSM) insisted at the time that the safety of the facility was never in doubt, adding that the detection process for intruders had worked well.

"It's an illegal action and it costs society," Ek told the TT news agency.

Greenpeace staged similar actions at the Swedish reactor parks Ringhals and Forsmark in 2012, which lead SMS to propose armed guards on site at the ten reactor parks across Sweden. The proposal was still under consideration when the last action took place.

Greenpeace Sweden explained the action at Oskarshamn as an attempt to highlight the dangers of ageing reactors.

The oldest reactor on site, the O1, was connected to the electricity grid in 1974. The second O2 reactor was plugged in two years later, in 1974.

The radiation authorities downplayed any immediate risk posed by the now decades-old reactors.

"All of the country's ten reactors have gone through or are going through large-scale modernization," SMS reactor security chief Lars Skånberg said. "We don't have any immediate safety problems today. And were we to detect such problems we'd close down the reactors immediately for repairs."