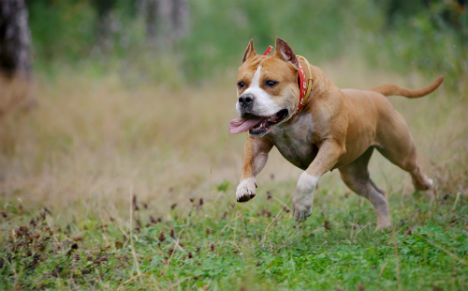 The attack took place in Härnösand when the dog suddenly jumped into the child's pram and bit the infant. After managing to get a hold of the baby the dog then dragged the child down a hill before witnesses intervened.

"The baby was in the pram and the dog jumped there," Jan Lidén of the Västernorrland police told the TT news agency.

Police described the animal, an American staffordshire terrier, as a fighting dog. The 25-year-old man, who was with the dog at the time of the attack, was previously known to the police and was later questioned.

Local media reported that he was not the dog's owner, while the police added that he was under the influence of alcohol. He is suspected of causing grievous bodily harm.

The child was treated in Sundsvall hospital for deep cuts on her thigh. Medics at the hospital described her injuries as being of moderate severity and she was discharged on the same day of the attack.

"She is feeling well considering the circumstances, even physically," Börje Öhman of the Västernorrland police told TT.

The police officer added that the dog will likely be destroyed in the wake of the incident following a professional appraisal.

Describing the attack Öhman said; "I've never seen anything like it."

The American staffordshire terrier breed of dog are banned in a number of countries including Denmark. In 2010 politician Mats Odell proposed a similar ban in Sweden citing safety concerns for the general public.