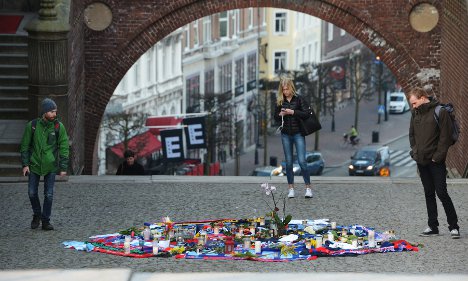 A tribute to the slain Djurgården fan. Photo: Johan Nilsson/TT

"Yes, I think that's the way to go," she told Sveriges Television (SVT).

The method has been used previously in ice hockey, noted the TT news agency, when security could not be guaranteed. When Djurgården met AIK for a qualifying derby at Hovet, the match was played without the guest team's fans present.

"The hockey league said that things were calm, there wasn't any sabotage but a lot of fights outside (the venue) Hovet," said Adelsohn Liljeroth

But the national sports culture coordinator Rose-Marie Frebran disagreed with the idea there were quick fixes, and said the death of a 44-year-old fan in connection to a Djurgården-Helsingborg match should not give rise to panicked suggestions.

"We have to keep working long-term and strengthen dialogue and cooperation between those involved," she told the Expressen newspaper. "And let what has happened unite us."

She underscored that people had to work against norms of masculinity and violence in the supporter culture, and noted that women were seldom involved.

The weekend's victim suffered grave head injuries after a fight broke out between rival fans of Djurgården and Helsingborgs IF in the city centre before the match started. Despite attempts to save the man's life he died in the local hospital shortly after arrival.

The game between the two teams kicked off as normal at 3pm but quickly descended into chaos. Fans from Djurgården chanted 'murderers, murderers, murderers' at the home fans and there were angry scenes after Helsingborgs IF scored to make the game 1-1 midway through the first-half.

Fans of Djurgården, many of whom wore balaclavas, stormed the pitch shortly after and the referee abandoned the game before half-time.