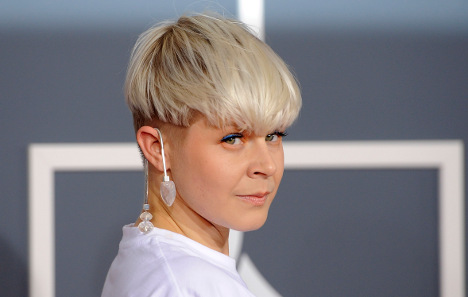 Swedish artist Robyn. File photo: TT
Its old sister company Volvo Trucks hit marketing gold in November with its short clip of Jean Claude Van Damme performing an "epic split" between two reversing trucks. The clip, set to the hypnotic sounds of Enya, has since been viewed over 70 million times on YouTube.
Volvo Cars was not to be outdone, it would seem. It followed with a recent commercial called  'Made by Sweden', starring Swedish football hero Zlatan Ibrahimovic, set to a rejigged version of Sweden's national anthem.
Now, 34-year-old pop star Robyn will take over the throne from Zlatan, reported the Expressen newspaper.
The ad will be based in New York and will centre on Robyn feeling homesick for Sweden.  Further details remain unclear.
Her ad is set to premiere in spring, the paper added. The commercial does not mark the first time Volvo has teamed up with Swedish artists, with Swedish House Mafia and First Aid Kit also lending their voices to the car company.
Robin, also known as Robin Miriam Carlsson, first shot to the attention of music fans across the globe in the 1997 when her first album Robyn is Here was released in the US.