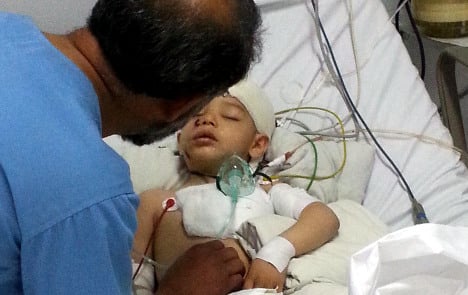 Faisal Khan returned to Sweden from Kabul last week after attending the funeral of his brother, journalist Sardar Ahmad, who was killed in a shooting earlier this month.

"It's surreal. You forget for a moment," Khan tells The Local.

When he arrived in Kabul, two-year-old Abuzar was still in a coma, but has now awoken. Bone fragments from a bullet wound to the head are, however, embedded in his brain, and now his grieving family has begun to talk about where the little boy can get the best care in the future.

At first, Khan was adamant that he had to bring Abuzar home.

"The Swedish embassy was amazing. They said 'It's not a question of if we'll help you get him to Sweden, but how'," Khan recalls.

The toddler suffered soft-tissue damage to each thigh and to his chest, with a fourth bullet to his head. His father, a respected journalist, died in the attack on a Kabul restaurant, as did Abuzar's mother and his sister and brother. The small child remains in hospital.

"It's not that they can't care for him, but the hospital has limited resources," Khan says. "If there is a massive attack in Kabul with 100 injuries they'd have to move him to make room."

"He's talking now. He's laughing and crying, he gets hungry and thirsty, he's back to being a normal baby," Khan says. "But the attention is overwhelming. It's fantastic that people want to share our sorrow, but we can't create chaos around him."

Many well-wishers have dropped by, and while Khan doesn't want to discredit anyone's motives for visiting the child, he notes that national elections are around the corner and the limelight is not where his nephew needs to be.

Where the child will end up is now the most urgent question for the family.

"He's not going to stay in Afghanistan, that's decided. He needs both physical and psychological therapy, and it will be long and painful," Khan says.

Despite rushing to the toddler's bedside hoping to bring him home, Khan says it is just him, his wife and their two children in Sweden, while the boy would have access to two paternal uncles and one maternal uncle – "and a smattering of relatives" – in Toronto, Canada.

Abuzar may yet end up in Sweden, but Canada is an option.