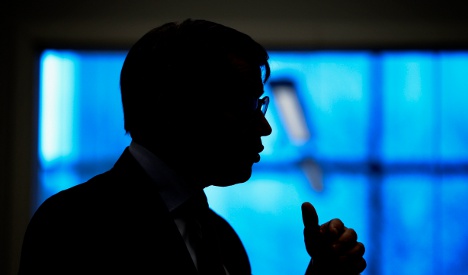 Göran Hägglund at Thursday's press conference. Photo: Jessica Gow/TT
The initiative came courtesy of Social Affairs Minister Göran Hägglund at a press conference on Thursday afternoon. He announced that the billions would be spent between 2015 and 2018 in an effort to provide quicker access  to cancer treatment.
The minister told the TT news agency that cancer patients could expect a range of improvements to the current system.
"They will notice shorter waiting times, less time to worry, and even sharper care," Hägglund said.
He added that uncommon forms of cancer will also be given more attention.
"One example is cancer of the penis, which affects around 80 people each year," he told TT. "Treatment is available in about 20 hospitals and that shows that the doctor who treats just one or two people each year won't reach the same level of skill as those operating more often."
The news came just one day after the Swedish Cancer Society (Cancerfonden) announced that there had been a 39 percent increase in fatalities from patients with diagnosed with skin cancer.