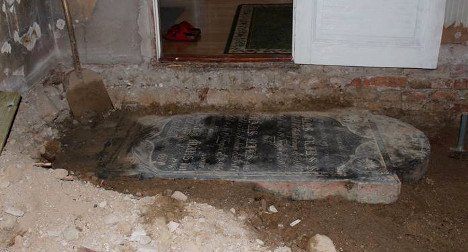 The Nilsson family found the hefty gravestone tucked in under the floor. It measured almost two metres in length and was some 10 centimetres thick.

"I was quite surprised. And my wife is still getting over the shock," Gert Nilsson told The Local. "It's the last thing I could imagine finding under my floorboards."

Nilsson explained that his house is "a pretty old one" and that the floors are directly on the ground, but added that despite 27 years in the house he's never seen anything like it.

The family looked up the three names engraved on the headstone and found they belonged to people who'd likely owned the property in Fuglie, southern Sweden, in the late 1800s. The stone had the names of two men and one woman who died in 1843, 1851, and 1884 respectively.

The homeowners, however, now have a new problem on their hands.

"We have no idea how we're going to get it out. It's huge – it must weigh 300 kilogrammes," Nilsson told The Local.
READ ALSO: Woman finds wedding ring lost in 1995 on carrot in her garden vegetable patch
The find marks the second time in less than a year that the Trelleborgs Allehanda newspaper has reported about local residents finding headstones by mistake as they go about their everyday business.
Jan Olsson was in his Hammerlöv garden hunting weeds when he came across a cluster of stone work hiding in the undergrowth. After research, Olsson concluded they were part of the headstone for pastor Bastian Bastiansen, who died in 1635.

"They must have chucked it out when they renovated the church," he told the paper last spring.