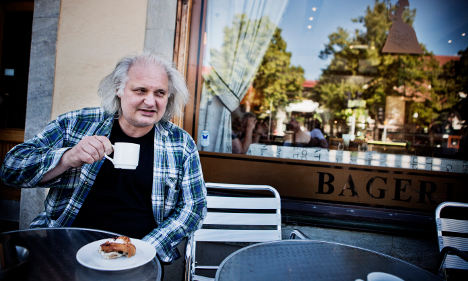 Göran Greider is not a fan of the new fashion rules. File: Axel Öberg/TT

"They're just tips and recommendations, they're not binding rules," head of communications Nina Wadensjö told the TT news agency, while fashion experts and pundits dissected the new style file on social media.

Dagens Arena, the left-wing online paper, broke the news on Thursday. Its reporter asked whether the opposition was simply taking a leaf out of the ruling Moderate Party's book. The Moderates were told to avoid ties and "look like normal people" last time Swedes were readying to go to the polls, all part of an image overhaul at the behest of spin doctor Per Schlingmann.

This time around, the Moderates told members they may want to consider wearing the party logo while out jogging, or why not put their pet in an outfit emblazoned with the party logo?

The Moderates' new party secretary Kent Persson told Dagens Nyheter in March that decking your dog out in party gear may make passers-by feel they could chat about politics with the dog owner.

"Of course it matters if we're out walking the dog and ready to talk a bit of politics with the voters," said Persson.

While the Social Democrats on Thursday had nothing pet-specific to tell its candidates, the roll-up-your-sleeves tip was met with mixed reactions. Göran Greider, the editor of Dala-Demokraten newspaper and a Metro columnist, told Dagens Arena that the Social Democrats may be trying to shed their image of being a "benefits party".

He called the sleeve dictate a "rhetorical substitute".

"It's a way to get the MPs to look like the working people, not the benefits people," he told the newspaper.

Greider said he smelled not a rat, but former Moderate Party spin doctor Per Schlingmann's philosophy behind the new image trend.

"Schlingmann is the prophet and all his messages will be presented by the Social Democrats sooner or later," Greider said. "It's tragic, actually. Politics is being fought on an ever-shrinking arena and that makes it important whether you roll up your sleeves or not."