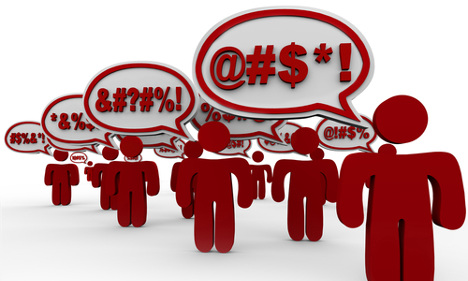 Swearing: Shutterstock.
The Swedes do not find Anglo-Saxon epithets offensive. Why would they? It’s a foreign language. Of course, they speak English very well but English swear words hold very little of the power they have in parts of the English-speaking world.
Indeed in Sweden the word "fucking" is used in a very modern way, as an intensifier, and in such use is left with no residue of the original procreative meaning. As for the sandwich shop owner’s other restaurant, Puta Madre, anyone with any shred of curiosity in other cultures knows that the Spanish also widely use the term to denote coolness – it’s not just an insult to one’s mother.
Those complaining about the use of the word may well be displaying a predictable ignorance of language. But it’s their cultural ignorance and arrogance which is rather more worrying.
We are living in Sweden. We are their guests. Why on earth should they worry about offending the overly delicate sensibilities of English-speaking immigrants? This is their country, their culture. Who the hell do we think we are?
Read also: Parents freaking upset about offensive sandwich
Indeed, I wonder if those who complain so vociferously would be quite so sympathetic to similar concerns of immigrants in their own countries.
I wonder if an American or English newspaper were to report upon the furious reaction of Arabs to a local restaurant called, say, Kool Khara (Eat Shit in Arabic), if the moaners would support the protesters. Or if they would instead berate the immigrants for being poor integrators and citizens. There is certainly a whiff of hypocrisy in the air.
Finally, it’s a case of cultural immaturity. Swear words are some of the oldest words in the English language. We should be proud of them.
"Fuck" was first documented in the 15th century but has been around a lot longer than that. It has not even always been a taboo word. We just seem to be enduring the tail-end of a censorious, priggish period of the English language.
So, instead of being (probably correctly) cynical about its use by the publicity-hungry sandwich shop owner, we should be thanking him for helping to strip the word of its power to shock. It is, after all, a fucking useful word.
Paul Connolly