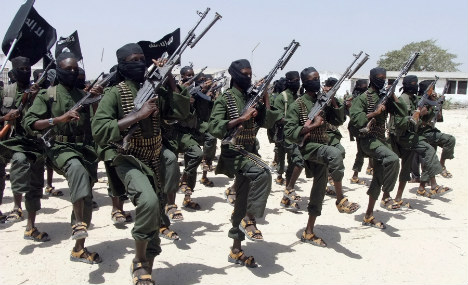 Al-Shabab fighters in Somalia. Photo: TT
The man was reportedly arrested on March 28th in the city Kapsowar in the Rift Valley province in western Kenya.
"The man is Swedish and he's now been taken to Nairobi. There are no more details to give at this time," More details I can not give right now , said Arthur Osiya at Nairobi police to Sveriges Television (SVT).
According to SVT a security source said that the Swede is of Somali origin.
According to the Swedish Security Service (Säpo) some 30 people since 2006 have travelled from Sweden to Somalia to take part in pro-Islamist activities.
The Swedish Foreign Ministry was on Friday unable to confirm details of the arrest. The Swedish embassy in Nairobi has not been informed about the man's identity or nationality, and in view of the fact that it is now the weekend, it remained unclear when this information would be forthcoming.
"It is also dependent on whether this person wants contact," said Catarina Axelsson at the ministry's press service to the TT news agency.
Al-Shabab has carried out terror attacks in Kenya in retaliation for Kenyan army operations on Somali soil.
The movement has in recent years been forced back into Somalia but controls increasingly large areas of the countryside. The name Al-Shabab means " youth " or "youths" and the network is believed to have about 5,000 fighters in Somalia.

MILITARY
Swedish soldiers to fend off pirates near Somalia
Url copied to clipboard!