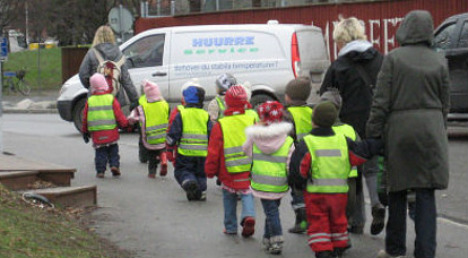 The pre-school children in the picture have no connection to the story. File photo: Flickr
The two girls, five and six-years-old, were subjected to attempted rape at the nursery school in the southern Swedish city in August 2013. The teenage boy was an intern at the pre-school during the summer holidays.
The girls had reported that the 15-year-old showed them his genitals in the bathroom at the school and told them to play with it in various ways.
The boy however continued to deny the offence and claimed that the girls had made up the story.
Malmö district court ruled on Friday that the girls' relatively detailed and consistent stories indicated that they were telling the truth and convicted the boy, according to local media reports.
The boy has furthermore been ordered to pay damages amounting to 100,000 kronor ($15,250) to the girls. The teenage boy's summer internship was mediated via a project run by the City of Malmö.