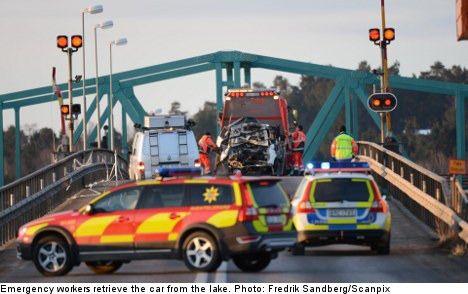 The incident occurred in March last year, when police were alerted to two suspected petrol thieves who were on the run from a gas station in Uppsala, eastern Sweden.
Police followed the two men at high speed through Enköping and further south towards Strängnäs – about 30 kilometres west of Stockholm.
In an effort to stop the thieves, police called ahead to operators at the Hjulstabron bridge, a 520 metre long drawbridge, and ordered them to open the bridge as they would for a passing boat.
But the thieves either didn't slow down in time, or decided to crash through the barricades in an attempt to escape, and then drove off the open bridge and into the icy water below.
On Tuesday, the officer who made the call to open the bridge was convicted of professional misconduct and fined 14,000 kronor ($2,154). He will not be relieved of his duties.
The prosecutor deemed that the officer could have used other methods to stop the fleeing thieves, and pointed out that opening the bridge was a severe method to stop people suspected of such a minor crime.
The officer's lawyer plans to appeal the verdict.