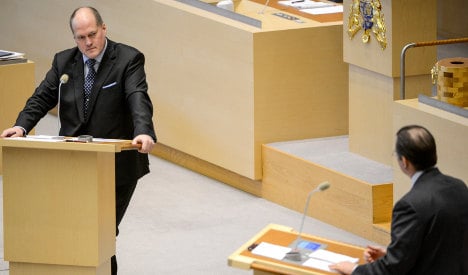 Having unveiled the government's spring budget earlier in the day, Borg returned to parliament where his fellow MPs were at the ready to rip the proposal to shreds.

Social Democrat MP Fredrik Olovsson told the Riksdag that unemployment had now reached eight percent, a significant jump since the government came into power in 2006.

"Despite this, Borg's budget has no focus on unemployment," Olovsson told his parliamentary colleagues. "In conjunction with tax cuts the unemployment will increase the deficit."

Borg responded that the Social Democrat-led opposition, in contrast to his government, had no clear plan for steering the country's economy. He asked, later in the debate, that the three main opposition parties tell the voters what was in store, rather than offering piecemeal critique.

He also faced flack from the third largest party in parliament, the Greens, as MP Per Bolund highlighted new figures from Statistics Sweden. Unemployment has gone up in all counties across the country with Stockholm the only exception, he noted.

Also the minority Sweden Democrats took to the floor to lambast Borg, stating that the motto 'crown-for-crown' to keep public finance in order did not cover immigration costs nor Sweden's fees to the EU. Sven-Olof Sällström claimed the government prioritized refugees over Swedish school students, and used Syrian nationals' blanket permission to stay in Sweden as an example.

Borg, however, quickly underscored that asylum issues were handled by state agency the Migration Board, not by the government, and that the true difference in opinion in the matter was not one of finances, but whether or not Sweden should be a safe haven to people in need.

"In that matter, we have different opinions," Borg told Sällström succinctly.