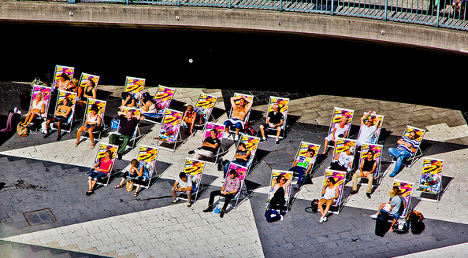 "The mortality rate among avoiders of sun exposure was approximately two-fold higher compared to the highest sun exposure group," the Karolinksa and Lund university researchers concluded in an article published in the Journal of Internal Medicine.
The researchers said that in countries that don't see a lot of sunshine, like Sweden, it could in fact be harmful for public health campaigners to tell people to stay out of the sun.
"Following sun exposure advice that is very restrictive in countries with low solar intensity might in fact be harmful to women’s health, resulting in excess mortality with a population," Lindqvist's team concluded.
While fair-skinned women living in sunny climates had the highest skin cancer rates, sun should not be considered the worst enemy for a woman because exposure increases Vitamin D levels, the scientists noted.
And once a person had developed a cancerous mole, low Vitamin D levels appears to have a link, albeit not explained in the study, to whether the patient had a fighting chance to beat the cancer or not.
"Low vitamin D concentrations have also been linked to thicker, more aggressive melanomas with shorter survival times," the study synopsis read.
To make sure the research was thorough, the women who filled out a survey had to answer questions not only about how much time they spent in the sun. They also had to tell the scientists about their education, whether they smoked, if they had a life partner, and the number of pregnancies they'd had. The questions also looked at the women's weight-to-height ratio or BMI, and how often they played sports or worked out. Income was also included as a factor.
Overall, women who had very little sun exposure suffered higher "all-cause mortality". Put simply, more of  the non-sunbathers in the study had died in past two decades than the sun lovers. But they died, broadly put, of other ailments than skin cancer.
The researchers noted that the US Navy had previously reported that its staff were at a high risk of skin cancer, but were healthier when looking at the bigger picture. The Swedish study seemed to echo that observation.
The finding left the Swedish scientists questioning the pervasive advice to stay out of the sun. The team, lead by chief doctor Pelle Lindqvist, noted that many public-health guidelines had been drawn up based on Australian research, but the sunshine there and up north differed when it came to UV rays.
The advice may simply not be appropriate for Swedes.
"Following generally restrictive guidelines in Sweden, a country located at the northern latitude of between 55 degrees and 67 degrees with limited sunshine and a low UV index, might not be optimal," Lindqvist and his team wrote.
"In fact, our findings indicate that these guidelines may indeed be harmful in terms of overall health of the population."