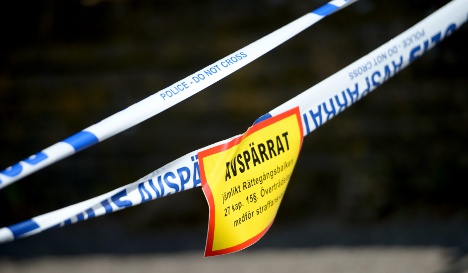 "We know that all three have fired their weapons, but where they were aiming, who they hit and where they hit is a question for ballistics," chief prosecutor Håkan Roswall at the national unit for police affairs told the TT news agency on Wednesday.

It was a break from ordinary protocol for the prosecutor to question the officers ahead of an internal workplace review of the shooting, which left a 34-year-old dead.

"Previously, you wanted to gather as much information as possible before you questioned the people who were involved, and who potentially could be placed under suspicion," Roswall said. "But if you wait for the police, which has responsibilities to its employees, to hold talks it risks affecting (their) memories of the event."

Feedback from forensics would not be available until Friday, at the earliest.

Roswall cautioned against attempts to explain why the number of police shootings had risen last year, and had already in 2014 crept up above the national average for fatal shootings at the hands of officers.

"I think you have to look at all cases where police fire their guns with the intention to hit the target, regardless of whether someone dies or not," he said. "Otherwise you're working on too slim a sample. Often it's pure chance if a person dies or not."

In 2011, police fired their guns with the intent to hit the target, which in Swedish is called verkanseld, on 30 occasions. One person died. In 2012, there were 22 reported incidents of verkanseld, and no one lost their life. In 2013, there were twelve incidents and four people died.

Some observers theorized after Tuesday's shootings that the recent generational shift within the police force could be to blame. In other words, that the proportion of young and inexperienced officers had risen. Roswall hinted that such a statement lacked analytical depth.

"It's easy to claim that it's because the police are young and new at the job, but you can never know how you will react when you find yourself in a life-threatening situation, or a situation where you think your life is at risk" Roswall said. "It's highly individual."

"You could have been on the job for a long time without ever ending up in this kind of situation before, and then you may react like a young person," he said. "And there may be young people who stay very sang froid."