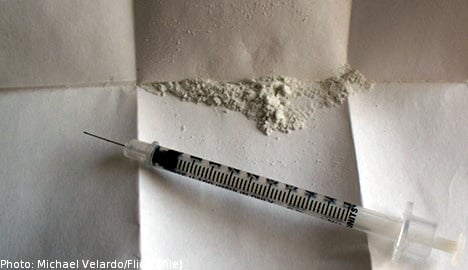 Cocaine, ecstasy and even cannabis are rarely seen in streets and clubs in line with Sweden's official "zero tolerance" approach. The ambitious target is clear.
"The overarching goal: a society free from illegal drugs," it states.
Sweden criminalized illicit drug use in 1988, thanks in large part to a two-decade campaign by a group called the Swedish National Association for a Drug-free Society (RNS). It followed a two-year attempt to introduce a more tolerant approach that was considered a failure by authorities.
"The most important link in the chain when it comes to the drug problem is the use of drugs, the demand that comes from the individual user," said RNS secretary general Per Johansson.
"If you don't focus on the demand you will never be effective combatting the supply of drugs."
Sweden also puts strong emphasis on prevention, with extensive drug awareness programmes in schools and even preschools. The country now has some
of the continent's lowest rates of drug consumption among students aged 15 and 16.
According to the European Monitoring Centre for Drugs and Drug Addiction (EMCDDA), only nine percent of the Swedish school population had tried cannabis, compared to 39 percent in France, 42 percent in the Czech Republic and around 25 percent in Britain, Belgium and the Netherlands.
'Something not Swedish'
A survey by the Swedish Drug Users Union in 2008 showed that a majority of the population supports the strict policy. Every other Swede said that possession or cultivation of cannabis for personal use should be punished with prison, and six in 10 believed that a "total war" on cannabis  — which the survey defined as arresting and jailing all dealers and users — was the best tactic.
"Drugs have always been seen as something not Swedish, like something foreign," said Börje Olsson, a sociology professor at Stockholm University.
"They are not part of the Swedish morals. People think 'this has nothing to do with us'."
The latest EMCDDA data shows that the number of Swedish adults between 15 and 64 who had consumed cocaine during the last year was almost five times smaller than the biggest consumer, Spain.
For ecstasy, consumption figures in Britain and the Netherlands were 14 times higher than in Sweden.
Police play a key role in enforcement. Anyone even suspected of being "high" can be detained and given a compulsory urine test. If positive, they are slapped with a criminal charge and must stand trial.
Official state data shows that illicit drug consumption accounts for about half of all offences recorded in Sweden.
The mood contrasts sharply with more "open" drug scenes found in clubs in Spain and Germany, and catches some off guard. One ex-addict and member of Cocaine Anonymous Sweden, who asked not to be named, said he became "totally paranoid" upon return to Sweden.
"You kept thinking all the time, 'Who are the undercover police here?'" he said.
Though lauding the benefits of no tolerance, certain experts argue there is a downside.
"We put a lot of effort in preventing people from starting to use drugs but we have little focus on the people who have an abuse problem," said Björn Johnsson, a drug policy researcher at Malmö University.
He linked Sweden's reluctancy to introduce harm reduction programmes, focused on rehabilitation rather than criminalisation, with the growing drug-related deaths.
Soaring drug-related deaths
In 2011, Sweden had almost twice the European average of drug-related deaths, at 35.5 per million people, according to the EMCDDA. And the number has almost quadrupled since the 1990s, from 70 cases in 1995 to 272 in 2010.
In the same period, when most European countries implemented harm reduction measures — like needle exchanges to prevent the spread of HIV — drug-related deaths decreased in Spain (698 to 393), Germany (1565 to 1237) and Italy (1195 to 374).
Ted Goldberg, a retired social work professor at Stockholm University, also sees criminalization of consumption as a factor in overdose deaths.
"If you're shooting up with somebody and they have an overdose, a normal person would call the authorities immediately," he said.
But in Sweden, "if they call medical authorities, drug addicts are afraid that the police will come and they don't want that."
Drug user support groups, meanwhile, complain that requirements for methadone treatment programmes are too strict while needle exchange programmes have been slow in coming.
The southern cities of Lund and Malmö were the first, acting on their own, to start needle exchanges in the 1980s, but it was not until 2006 that parliament passed a law allowing all regions to do the same.
Even today, only three of Sweden's 21 counties have joined the programme, including the influential Stockholm region — home of the capital and the government — which only started in April last year.
Though a fierce advocate of the no tolerance policy, even RNS chief Johansson readily concedes that Sweden has sidelined its hard core addicts.
"We don't take care of the old users, the heavy users, people who are deep in the problem," he told AFP. "We don't take care of them properly."