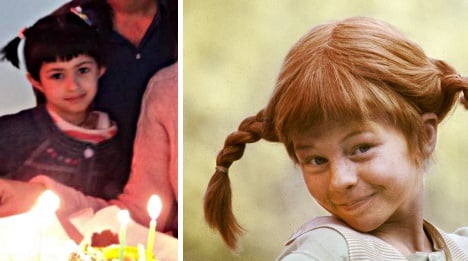 Varnika (L) shows her Pippi-style plats. Files: Private, TT
Pippi Longstocking, an unconventional Swedish fictional character created by Swedish author Astrid Lindgren, is a hit among the Swedish children. Kids of expats have not been spared of her charm. What about her is it that kids like?
"I want a pony like her, I want to lie down like her," says Varnika, referring to Pippi's preference to ponder the world while lying down. While Varnika's mum, who is clearly amused by the rambunctious red-head character, asks several times if Pippi is funny, Varnika doesn't accept that description. It seems for her, Pippi is a role model, not entertainment.
"She's not funny," says the determined four-year-old, who wears her black hair in Pippi-style plats sticking out from the sides of her head. "I want to be like her."
Varnika is not alone. Among several expat families that The Local speaks with, Pippi pops up frequently.
"It is very important for them to read Swedish literature and become familiar with the country and their traditions," says Joydeep Dash, whose daughter Lona, 10, says she was "addicted" to Pippi, before moving on to the more age-appropriate works by Maj Bylock.
Dash and her younger sister's reading habits also benefit their parents.
"My daughters are the bridge between Sweden and India and motivate us to learn Swedish," he adds.
Chinese-Canadian Mary-Ann Bergman, who is married to a Swede, says other Astrid Lindgren books are favourites in their multicultural household. Lindgren (1907 – 2002) wrote an enormous number of children's books, many of which were translated from German to Arabic. Karlsson on the roof is a hit in Russia, while Mio min Mio was filmatized in 1987, with Christopher Lee as the bad guy.
But Bergman also wants her kids to keep in touch with their Canadian culture.
"They live in Sweden so they will pick up Swedish naturally but I would like to introduce English to them as well," says Bergman, who reads North American books like the Very Hungry Caterpillar by Erik Carle, and Dr. Seuss books like Fox in Socks and Green Eggs and Ham to her daughters Leah and Ellie.
Keeping the children in touch with the parents' home culture is also important to Joydeep Dash, who moved to Sweden from India via Germany.
"We have a pile of Indian literature books starting from Amarchitrakatha to Tinkle," he says of the comic books that use pictures to explain Hindu mythology and Indian history.
"That is how they identify with our culture and values," says Dash.
For many parents though, picking kids books from their home country is easy, as well as nostalgic.
Scouse-Swede Christine McNab tells The Local that her Swedish husband would select the Swedish books, while she reverted to her own childhood favourites – Enid Blyton's The Famous Five and The Secret Seven, while the Narnia chronicles by C.S. Lewis were found in their home both in book and audio book format.
Bergman agrees.
"I read books to them which I read as a child, because I am familiar with them," says Bergman, who on top of keeping up with Swedish and North American literature tries to speak Cantonese as often as she can with her kids.
Language is important to many families where one or both parents are immigrated. Marco, who doesn't want to give his full name, reads short stories in Portuguese to his daughter, who, despite still being so young, loves the Menino Maluquinho (The Nutty Boy) comic books by Ziraldo. Another Brazilian cartoonist, Mauricio de Sousawho, has more than 200 characters for Marco's daughter to get acquainted with.
"I focus on the Brazilian part, her mother and day care does the Swedish part," adds Marco, who has shared custody of his daughter.
Deepti Vashisht