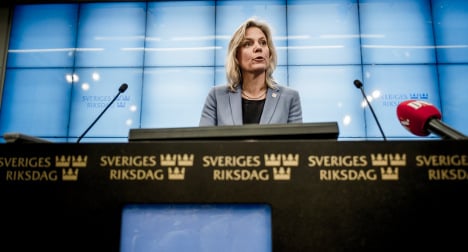 The Social Democrats have secured state income of about 32 billion kronor ($4.9) in its shadow budget, which did little to sway the party's critics.

"It's expensive, ineffective, and stupid," she said of employers paying less in social security contributions for younger staff. "It's better to use that money for something else."

The Social Democrats also targeted the ruling government's restaurant VAT reform, which proponents have said spurred job creation in the industry. Andersson did not agree, citing research that the lowered VAT had not contributed to more jobs for the young.

She hinted that the restaurant VAT question was a question of ideological priorities, which voters would now get to have their say on.

Representatives from the four-party government were left unimpressed by the shadow budget.

"Unfortunately the lion's share of tax increases have zoomed in on jobs, and in particular young people's jobs," said Centre Party finance spokesman Martin Ådahl. "It's exactly what we were expecting, but a tad worse."

The finance minister told the Dagens Industri newspaper that the Social Democrat budget left several questions unanswered, and pointed out that there was still no word on finances from the Green and Left Parties, with whom the Social Democrats are expected to cooperate with if the government loses at the ballot.

"Then we'll get budget quarrels and debates about who's getting let down by whom, and then we're back in the old conflict we had last time they tried to rule together," Borg said.