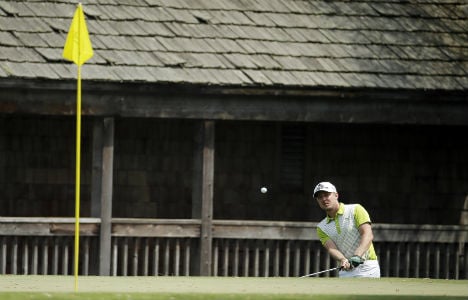 Jonas Blixt hits out of a bunker on the 11th fairway during the second round of the Masters golf tournament on April 11, 2014, in Augusta. AP Photo/Charlie Riedel)

The 29-year-old is just four shots shy of leader Bubba Watson going into the weekend's play. Blixt shot a 71 to vault into third place on the leaderboard at three under par.

"This is all you want. You want to be in contention come Saturday and Sunday. So I'm very happy with where I'm at," Blixt told AFP.

He added; "You can't ask for anything else, to be up there and have a chance of winning."

No rookie has won the Masters in 35 years since Fuzzy Zoeller donned the green jacket at the first attempt in 1979.

Blixt, who is currently ranked 100th in the world, has chalked up three wins in his professional career and finished fourth in last year's USA PGA major championship.

He currently plays on the American PGA Tour and said he is enjoying the challenge of the Augusta National golf course in Georgia.

"It's baking up. It's going to be a fun test this weekend. I just love fast greens. It's so much fun to play. And I see the lines better. There's a lot more touch around the greens," he said.

If Blixt were to win the Masters he'd become the first Swede to claim the tournament, one of golf's prestigious four majors.

Indeed, no male Swedish golfer has ever won any of the four major tournaments (Masters, US Open, The Open, US PGA). Henrik Stenson came close to ending that run in 2013 when he was runner-up at the Open and then placed third at the US PGA.