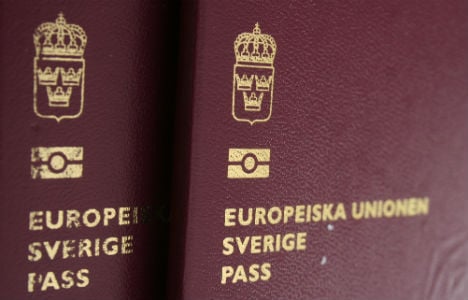 The report, which was published in Swedish daily Dagens Nyheter, revealed that 177,000 valid Swedish passports have vanished, potentially into criminal hands.

It also stated that in the last two years alone some 861 people have reported losing three passports. Two individuals claimed to lose 12 passports between 2012 and 2014.

A police inspector for the National Investigation Department (Rikskriminalen) told the newspaper that Swedish passports were being used by criminal gangs, in particular for people smuggling.

"We are convinced that the documents are used in other organized crime too from fraud to terrorism offences," said Kerstin Högback.

Högback added that the figure of 177,000 valid missing passports was likely to be much higher.

"In reality it's much worse because all of the missing passports are not included in the statistics," said the police inspector.

Sweden's passports were modernized in 2012 and are now considered to be amongst the most difficult in the world to copy. Under Swedish law a citizen can renew their passport as many times as they like without fear of being questioned by the police.

As a result a valid passport can be easily used by a person who looks similar to the official bearer. The current legislation means that Swedish passports are attractive to criminal organizations and used for smuggling purposes.

"We have very liberal rules in Sweden. Several other countries have tightened the rules and toughened the demands," Lars Böhle, head of travel documents of the National Police Board (Rikspolisstyrelsen), told the newspaper.

A new Swedish passport can be obtained legally for 350 kronor but its value skyrockets on the black market, to as much as 80,000 kronor.

Following the report the Swedish government has launched an investigation into the misuse of passports.