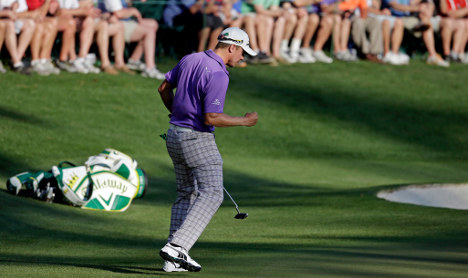 Jonas Blixt after a birdie on the 16th. Photo: AP
Blixt fired a one-under par 71 on Sunday to share second with Jordan Spieth at the 78th Masters, each of them on five-under 283, three shots behind winner Bubba Watson.
Blixt, who finished fourth last August at the PGA Championship, hopes his efforts will be enough to convince European Ryder Cup captain Paul McGinley, whose name he struggled to recall, to select him for the squad to defend the trophy in Scotland next September.
"That would be a lifelong dream to appear on one of those teams. I'm going to do everything I can, absolutely everything, to be on that team," Blixt said.
"It's up to Paul McGinley to make the decisions on that. I'm going to try to play as good as I can in order so he doesn't have a choice but to pick me. I would love to be on that team."
No Swedish man has ever won a major and Blixt never came within three shots of the lead on the back nine, adding to his notion of a jinx.
"I hope that curse kind of ends soon," he said. "I'm going to do as much as I can and work hard at it to end it. It almost feels a little bit of a curse because we have so many good players coming through.
"I would love to win a major. That's one of my lifelong dreams."
Blixt was the unlikely leader of the European charge, but never got the birdie chances that might have made him a green jacket threat.
"I played decently, just didn't get my approaches as close as I wanted and didn't give myself enough opportunities to make birdies," Blixt said.
"But I learned a lot and have a lot more new experiences and can't wait to come back."
Blixt could have been the first Masters debutante to win since Fuzzy Zoeller in 1979 and had hoped to be the first European winner of a green jacket since Spain's Jose Maria Olazabal in 1999.
"It's really tough. You beat your head in a little bit but you can't beat yourself up too bad," he said. "I love majors. I love when it's tough. It's not a shootout. So the harder the better."