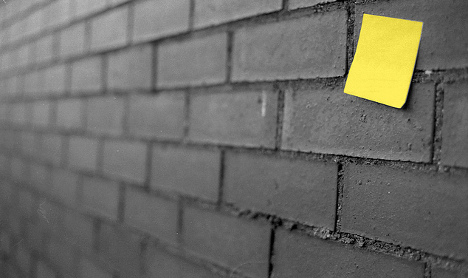 A post-it. File photo: Sarah Joy/Flickr
The woman managed to escape after she wrote a message on a Post-it note and threw it onto the footpath below the apartment.
"Help me. Call the police," the Malmö woman wrote, together with her name and personal ID number.
The message was found by children who passed it on to adults, who in turn contacted authorities. Officers arrived at the home to find the couple, together with their daughter, and arrested the man on the spot. They noticed there were signs the woman had been assaulted, reported the Aftonbladet newspaper.
On Monday, the Malmö District Court found the 58-year-old man guilty of aggravated violation of the woman's integrity (grov kvinnofridskränkning) and unlawful detention (olaga frihetsberövande). The court noted that there was a clear desperation apparent in the woman's note.
The husband had abused the woman for years and had kept her locked in on several occasions. He had sometimes even taken her passport, phone and keys, the Expressen newspaper reported.
He was told on Monday to pay 50,000 kronor ($7,625) in damages to the woman.