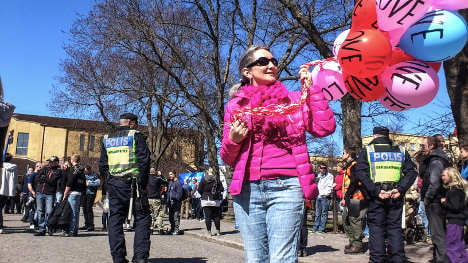 A counter-demonstrator holds Love balloons last year in Jönköping. File: TT
Nazi group The Swedes' Party (Svenskarnas parti) has been given permission to march through the streets of Jönköping on May 1st. After a similar May Day parade crumbled into violence last year, local police aren't taking any chances.
They have ordered 250-300 police to be on hand, and have suggested that local residents steer clear.
"We aren't recommending that people stay home, rather that they keep out of the way," Camilla Danielsson of the Jönköping police told the TT news agency.
READ ALSO: 'Nazis, you're not welcome here': small town mayor
Police explained that they chose to allow the demonstration because denying the protesters a permit might cause even more damage.
"We can't deny anyone the right to protest at the risk of things getting messy. It's our objective to ensure that order is maintained," officer Mats Rosenqvist told Sveriges Television (SVT).
Local politicians had tried to put a stop to the demo earlier this month.
"It's their democratic right to demonstrate, just as it is our democratic right to voice our objection to their demonstration," local Liberal Party (Folkpartiet) politician Anna Mårtensson told The Local.
Last year, extreme-left activists attacked the demo, Sveriges Television reported. In the ensuing tumult, five people were injured. The police, who were reinforced by officers from other districts, detained 29 people and arrested four of them.
Counter-demonstrators torched several cars in the melée, which saw an estimated 200 people either marching with the Party of the Swedes, or protesting against them.
The small extreme-right fringe party made headlines last month after members appeared to take responsibility for a stabbing in Malmö, which left a well-known activist in a coma.