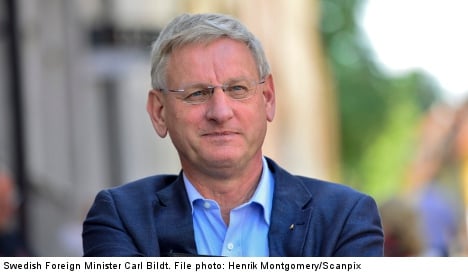 Carl Bildt backed Ukraine's right to use force as more pro-Russian activists storm police stations and administrative buildings in eastern Ukraine.
"If illegal armed groups took over police stations and local government offices in Sweden we would use all our instruments to restore order," he tweeted in the early hours of Monday morning.
His sentiments have been echoed by Lithuania and Luxembourg in the past 24 hours.
Before an EU conference in Luxembourg on Monday, the minister added that the Ukrainian police should not be afraid to employ violence.
"Police always use violence, in Sweden. To maintain law and order you need the possibility of using violence. The Swedish police do that too," he said, reported the TT news agency.
He added that any other democratic state should and must respond similarly.
Bildt also laid out a series of demands for Russia as part of what he labelled a "de-escalation" process.
"It's very important that we very clearly demand that Russia backs off its destabilization strategy," he said on Monday.
He called for the invasion mandate to be revoked and for Russia to "clearly disassociate themselves from the armed illegal groups that are occupying government buildings and police stations in Ukraine".
He demanded that the Russians take back their concentration of forces along the Ukrainian border.
"I think we should be very firm in our demands," he said, adding that if Russia did not respond "then we should be ready to move forward."
Bildt also said he was worried by what he viewed as clear Russian attempts to prevent Ukraine from holding a presidential election on May 25th, TT reported.
"Listen to what they are saying, they are quite clear: they don't want the election to be held, they want it to be postponed and to prevent it from being held in the near future. It is therefore very important that we give the election our strong backing and are ready to send in all the election observers needed to support the Ukrainian authorities.
The conference in Luxembourg resulted in the Council of the European Union approving a €1 billion macro-financial support package for Ukraine.