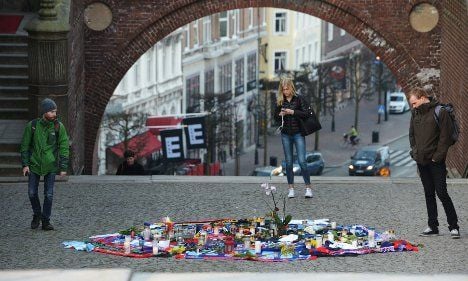 The memorial in Helsinborg to the slain man. File: TT

Until recently Helsingborg was best known for its close proximity to neighbouring Denmark, where Swedes eager to lap up the more liberal alcohol laws will throng the Danish sister city Helsingør across the sound.

The events of March 30th, 2014, however, have put Helsingborg on the map. On the first day of the new Allsvenskan season, a fan of Stockholm club Djurgården was killed in the city centre.

In the wake of the incident, the match between Helsingborg and Djurgården descended into chaos. The away fans chanted ‘Murderers!’ at their hosts and stormed the pitch in rage, forcing the referee to abandon the game.

“It was, quite simply, the worst day in the history of the club,” Helsingborg IF marketing manager Henrik Leveau told The Local as he prepared to greet guests at the club’s Olympia stadium.

The 44-year-old victim was a father of four. A man aged 28, and also a father of four, is currently being held in connection with the death having presented himself to police.

Following the killing, the spectre of football hooliganism in Sweden has been discussed at large. Sports Minister Lena Adelsohn Liljeroth suggested banning away supporters from the stands as a solution to the clashes.

Such ideas are given short shrift by devotees of the Swedish game, like Häcken fans Mikael Wallgren and Joakim Örngren. The pair trekked down from Gothenburg to see their side in action in Helsingborg and said they weren’t scared.

“We have nothing to be frightened of as our fans have a good reputation. When we go to an away game it is like a family outing as everybody knows each other,” Wallgren said outside the stadium, a beer in hand.

"The politicians will say anything as it is an election year," he added. A memorial in central Helsingborg to the slain Djurgården fan. File photo: TT

Anybody who came to Helsingborg scared they would see a repeat of the violence were left relieved. Häcken brought an estimated 200 fans, including its female junior team, and the atmosphere was cordial. Club stewards described their visitors as the ‘ideal club’. The police presence was minimal.

Helsingborg IF's Henrik Leveau said the atmosphere had been completely different two weeks ago, and the behaviour of the away fans a different matter entirely. Djurgården fans arrived in their thousands before the ill-fated clash with Helsingborg.

"You could sense the tension in the city beforehand with the helicopters flying overhead,” said Leveau, who added that an estimated 4,500 Djurgården fans had travelled south for the game.

"A thousand of them were here to cause trouble."

The killing was not the only incident that weekend, which was marred by numerous clashes between the two sets of troublemaking supporters, known as ultras. A group of Djurgården fans trashed a local pub and threatened female customers with broken bottles.

Details surrounding the killing remain disparate. You don’t have to go far to be offered conflicting accounts of what happened the day the 28-year-old got into some kind of brawl that would cost another man his life.

Helsingborg IF officials conceded to The Local, however,  that the suspect was known to the club and had a history of troublemaking.

Clearly, lessons are being learned and some were in evidence as Häcken arrived in town. Dozens of pens hung off the fencing for fans to sign an 11-point manifesto pledging to be good ambassadors and to show tolerance. If you didn’t sign it, you didn’t get in.

“We marched together with the fans of Helsingborg to show solidarity and to stand up to the hooligans,” said Häcken fan Joakim Örngren before kick-off.

When the two teams came out they stood side by side and held up a banner which said ‘United Against Violence.’

Partly, the club had to do something.

“After the Djurgården game many of the club’s sponsors wanted to pull out," Leveau said. "They didn’t want to be associated with football any more."

While he and his colleagues convinced the sponsors to stay in the end, Leveau himself said he is aware that some games entail real risk.

“When my son is older I’ll probably bring him to games, but not the high-risk ones like against the Stockholm clubs or Malmö," Leveau said.

"That’s sad, so something has to change before then.”

In order to get to the Olympia stadium you need to scale the steep Kärnan fortress which dominates the city. At the top of it a makeshift memorial to the slain fan was erected with the simple words ‘Enough!’

As the fans walked home following Helsingborg’s 4-2 win, many stopped by the memorial, which was adorned with fresh Häcken scarves, for a quiet moment of contemplation.