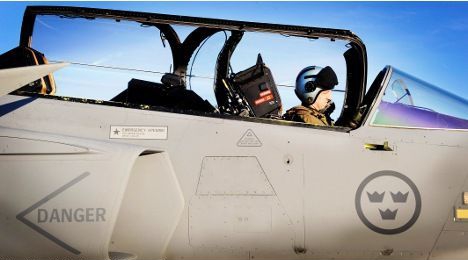 Saab's Jas Gripen. File photo: TT
The 1.9 percent global decline followed a 0.4 percent drop in 2012, the Stockholm International Peace Research Institute (Sipri) said.
"The increase in military spending in emerging and developing countries continues unabated," said Sam Perlo-Freeman, director of SIPRI's Military Expenditure Programme.
"While in some cases it is the natural result of economic growth or a response to genuine security needs, in other cases it represents a squandering of natural resource revenues, the dominance of autocratic regimes, or emerging regional arms races."
The world spent $1.75 trillion on the military in 2013, according to Sipri's data, which accounted for inflation.
The decrease was led by a 7.8 percent fall posted by the United States, the world's largest spender, as a result of the end of the war in Iraq, the beginning of the drawdown from Afghanistan, and the effects of automatic budget cuts passed by the US Congress in 2011.
But the next three highest spenders — China, Russia and Saudi Arabia — are among 23 countries around the world that have more than doubled their military expenditure since 2004.
China increased its spending by 7.4 percent in 2013, while its territorial disputes in the region have in turn prompted neighbouring countries to step up their military outlays.
"Japan's concerns over China's growing military power, combined with the Japanese government's own nationalist policies, have led to Japan ending its long, gradual decline in military spending," said Perlo-Freeman.
"Nevertheless, the largest increase in the region in 2013 was by Afghanistan, by 77 percent, as it builds up its security forces in preparation from the withdrawal of most foreign troops at the end of 2014."
In the Middle East, military spending increased by four percent, led by Saudi Arabia, which leapfrogged the United Kingdom, Japan and France to become the world's fourth largest military spender.  Tensions with Iran and fears of an "Arab Spring"-type revolt were the likely main factors explaining the Saudi increase of 14 percent, said Sipri.
However, the estimated total for the Middle East is highly uncertain, as data for 2013 are not available from Iran, Qatar, Syria and the United Arab Emirates.
"This reflects the general opacity of military spending in the region, and even where data is available it may not cover all military spending," said Perlo-Freeman.
In Africa, spending rose by 8.3 percent, driven by growing oil revenues in the case of countries such as Algeria and Angola, Sipri said.