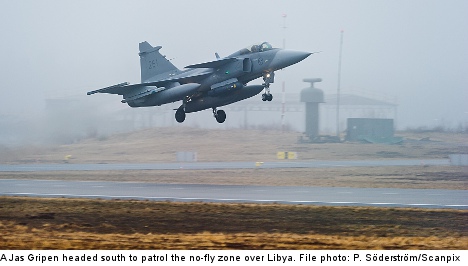 A study by the Som Institute at Gothenburg University showed on Tuesday that 29 percent of Swedes would support joining the defence alliance.
The increase in support, however, is unrelated to the recent crisis in Ukraine, noted researchers Joakim Berndtsson, Ulf Bjereld and Karl Ydén in the debate pages of the Dagens Nyheter newspaper.
In fact, the majority of the survey was carried between October and December last year, before the Ukraine crisis began.
Public opinion about joining Nato has has fluctuated in recent months, which was evident in a poll from the Svenska Dagbladet newspaper last month.
There, Ukraine developments appeared to have strengthened Swedes' resistance to Nato membership, with 50 percent of respondents against joining, marking a ten percent increase from a similar survey in May last year.
Finland's Prime Minister Jyrki Katainen said during the weekend that both Finland and Sweden should consider joining Nato "when the time is right".
"My personal opinion is that Finland should belong to Nato. It would strengthen Finland’s position. But I’m in the minority," he told Finnish Broadcasting Company Yle.