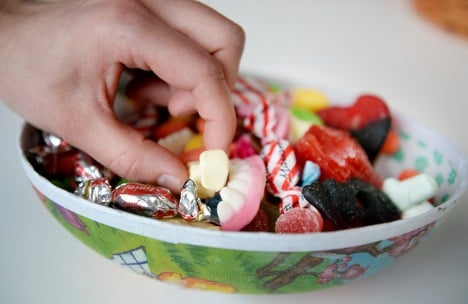 Tempted by that huge Easter egg filled to the brim with sweets? One Swede is resolutely not going to give into temptation.

"I don't find it particularly appropriate to have Easter eggs or candy lying about so everyone can saunter by and fiddle with them," said Kjell-Olof Hedlun, former chief microbiologist at Sweden's Centre for Communicable Disease Control (Smittskyddsinstitutet).

"You're touching sweets you won't yourself eat. Maybe you've been to the toilet or you've got bacteria and virus on your hands," the retired scientist warned.

He pointed out that the noro virus was still kicking about in Sweden and that not all pic 'n' mix sweets were safe. Swedes usually fill big cardboard Easter eggs with pic 'n' mix sweets, but the open boxes that shoppers dig into when they're curating candies could be unsafe.

Especially not the varieties on offer in the lower rows at the store, Hedlund pointed out, because young children could easily reach into the boxes.

"I have to admit I too eat pic 'n' mix, but sometimes I think, is this really that good of an idea?" Hedlund told the TT news agency.

He had quite stern recommendations for how to offer sweets to any Easter guests.

"If you're going to give a treat to someone I think the sweets should be wrapped," Hedlund said.

While no major outbreak of stomach bugs or vomiting virus have been tied to pic 'n' mix, Hedlund said that just having germs simmering in the food chain could mean Swedes are more susceptible to other seasonal illnesses, such as the noro virus, commonly known as the winter vomiting bug (Vinterkräksjukan).