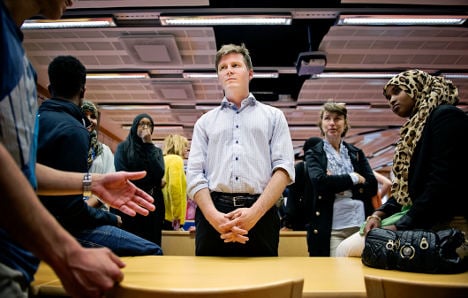 Integration Minister Erik Ullenhag visits a school in Tensta, one of the neighbourhoods mentioned when he and his colleagues first floated the new start zone proposal. File: TT

In 2011, the finance, enterprise, and integration ministers announced the introduction of New Start Zones (nystartszoner).

"We have got areas where unemployment is the norm, and exclusion (utanförskapet) is inherited from generation to generation," Anders Borg, Maud Olofsson, and Erik Ullenhag wrote as they identified neighbourhoods in Sweden with socio-economic challenges.

If the proposal managed to push employment rates in Sweden's most vulnerable areas up to the level of the national average, it would create 20,000 new jobs, they argued.

The finer points of the government's intentions, however, were not mentioned in the statement released on Thursday. It simply said that were the government to reform the New Start Zones in a way that addressed the European Commission's concerns, the tax reductions for small businesses (fewer than 50 employees) would not have the effect that the ministers had first desired.

"The Commission's objections mean the government will not proceed with the new start zones," the statement read. "Such changes to the proposal would make the system more administratively cumbersome for the companies, and at the same time fewer companies would qualify for support."

"It would thus not be an effective tool for employment and entrepreneurship," the Swedish government said.