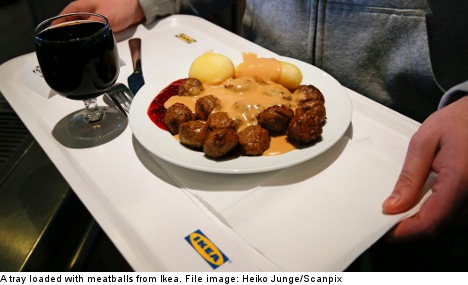 Customers who flock to the flatpack behemoth's stores consume 150 million meatballs between them each year.

However, the company's head of sustainability in the UK said the beef and pork content of its existing meatballs make them rather carbon intensive.

"We have been working with WWF looking at meatballs and other food items we sell and looking at how we can tweak our recipes to give great taste but also perhaps less of an environmental impact," Joanna Yarrow said at a conference in London, reported Business Green magazine.

Yarrow added that Ikea has already experimented with the recipe, and even served up chicken meatballs at two stores for trial purposes.

Meatballs have long been a staple part of any trip to Ikea with a plate of them costing as little as 19 kronor ($3).

In 2013 Ikea temporarily pulled meatballs off the menu after it was revealed they contained traces of horsemeat. Following an investigation the popular Swedish mealtime favourite was returned to its restaurants.

“We had people begging us to put them back on the menu whatever was in them," said Yarrow.

She said its food experts would continue tweaking the recipe of its existing meatballs, and that a chicken meatball and a vegetarian alternative would be available for hungry customers in 2015.

In the meantime the company will continue selling its regular meatballs but stated they were keen to introduce lower carbon alternatives going forward.