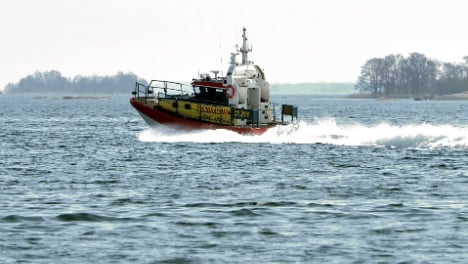 A coastguard vessel involved in the rescue operation. Photo: TT
"One of the captains has erred… The investigation currently involves both of them but neither is currently suspected of any crime," said Aris Janisels at the marine police in Stockholm.
Two passengers on board the taxi boat at the time of the crash were interviewed by officers on Sunday and the course and speed charts of the Viking Line ferry Grace will undergo inspection.
The incident unfolded just before midday when the little vessel smacked into the Grace which was en route for Finland. The Baltic ferry had left Stockholm earlier in the morning carrying 1,827 passengers.

Emergency services were quickly on the scene and locals from the island of Marö assisted with the rescue. Two men and a woman were retrieved from the bracing waters and treated for shock.

"Three people ended up in the water and the boat sank," Stefan Johansson of the rescue services told the TT news agency.

A member of the coastguard services paid tribute to the quick-thinking locals who sped to the scene in their own boats to help, describing them as "heroes".

The three rescued individuals were brought onto the island of Marö where they were given dry clothes and treated for shock. They were taken to hospital for further treatment.

The incident temporarily delayed the cruise ship which was heading to Åbo via Mariehamm but it resumed its course shortly after the drama.

"We are of course very glad that these people survived. They really had guardian angels with them," Helena Kneck, communications officer for Viking Line Sweden, told TT on Saturday.