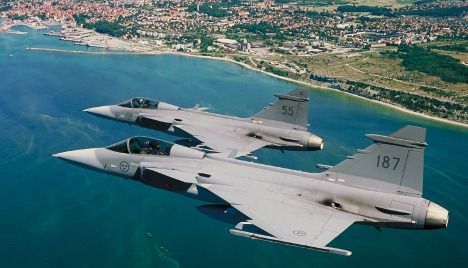 In an article published in the newspaper Dagens Nyheter (DN) the four party leaders wrote about the crisis in Ukraine and how Russia had now ramped up both its military and propaganda machines.

The leaders said they had previously welcomed Russia's attempts to embed itself deeper in the global community, despite harbouring fears that the tide could turn at any point.

"What we see today is a Russia that acts in a way that confirms and surpasses the fears we had then," the leaders of the Moderate, Liberal (Folkpartiet), Centre and Christian Democrat Parties wrote.

If the coalition were to remain in power, it would aim to increase the military budget by five billion kronor ($760 million) annually, starting in 2015.

"Seen against the backdrop of developments in our region it can be particularly motivated to increase Swedish presence on the Baltic Sea and on Gotland Island," the op-ed text stated.

It would also order Saab to provide the Armed Forces (Försvarsmakten) with 70 rather than 60 of the new generation of Jas Gripen E fighter jets. Adding more submarines to the naval fleet would also be on the cards if the government's proposals make it to the negotiation table with other parliamentary parties. Sweden has traditionally anchored much of defence policy across party lines to secure longevity.