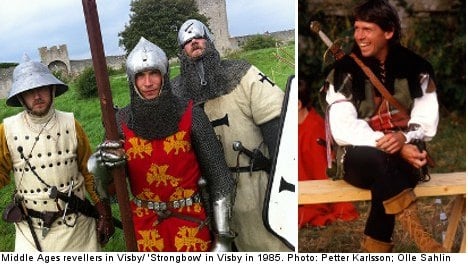 Michael Boatwright, 61, was found unconscious in a Florida motel last year. When he awoke, he could only speak Swedish. The riddle was soon solved, however, as friends of Boatwright in Sweden recognized him.

"I first met him when we were both members of a Medieval association called the Society of Creative Anachronism (SCA) in the 1980s. He went by the name of Strongbow," Johan Cassel of the SCA told The Local.

After the discovery, Boatwright moved to Uddevalla where he was working as a tennis coach.

The local Bohuslänningen newspaper reported that he died in the western Sweden town on Tuesday. His body was found by a friend who had not heard from Boatwright in several days. Police suspect no crime in the death.

In an interview with the newspaper after his move, Boatwright had spoken of his joy about living in Sweden again.

"I feel reborn, I'm so lucky," he said. "Things couldn't have worked out any better."

Boatwright also said he hoped to extend his Swedish work visa, adding that he hoped to find his son.

Before he was helped to move to Sweden, the 61-year-old had been stuck in a Palm Springs hospital without insurance, no income and with only $180 in his pocket.

When he woke up Boatwright, he insisted that his name was Johan Ek, reported The Desert Sun newspaper. While this is a fairly common Swedish name, his Swedish Medieval re-enactment friend Johan Cassel could only speculate if it had some connection to the mystery patient's role-playing days.

"I don't know where he has got that name from, but I do recall that one of his closest friends at the time was a person by the name of Ragnvald Göransson Ek, so it is possible that he got it from there."