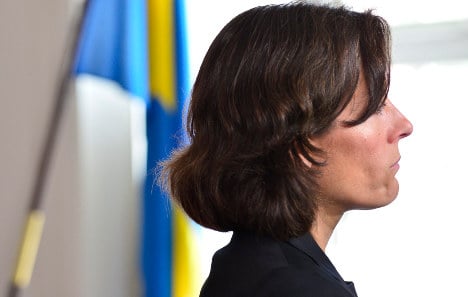 Defence Minister Karin Enström said the high-precision missiles would chiefly act as a deterrent to other countries that might be considering an attack on Sweden.

“They would give new capabilities by offering a longer reach, but also the ability to fight targets that are further away,” she told Sveriges Radio (SR) on Thursday.

She said the move would “increase the effectiveness” of Sweden’s defence.

The cruise missiles would be added to the next generation of Gripen jets, and would be able to cause severe damage to targets 1,000 kilometres away. Current cruise missiles can only travel half that distance. The new missiles can fly at low altitude, have GPS guidance, and can manoeuvre like an aircraft.

“This is nothing to be concerned about; Sweden wants to build the same capabilities that other countries have built. It’s more of a psychological thing,” he told The Local.

The Swedish Armed Forces pointed out that other countries in the wider Baltic area, including Finland and Russia, were investing in similar weapons.

The new proposal flies in the face of comments from Foreign Minister Carl Bildt, who said last year that cruise missiles would “never be relevant for Sweden. Our defence is a defence”.

Hult pointed out that Bildt’s comments were made long before Russia moved in on Ukraine.

“There is a clear contradiction here. Before the Ukraine crisis, a move like this would have been perceived as quite aggressive. But after Russia’s behaviour, Sweden has obviously seen the need to stock up on the missiles,” he explained.

Enström, meanwhile, claimed that Sweden had to keep up with the ever-changing face of world conflict.

The proposal ruffled feathers with the Green Party (Miljöpartiet).

“This is a 180-degree turn compared to their previous approach,” Peter Rådberg, the party’s defence policy spokesman, told the Svenska Dagbladet newspaper.

He explained that such weapons were “crazily expensive” and were not the kind of offensive weapons needed in a defence force.

Hult argued that it was useless to define the guided missiles by their defensive or offensive properties.

“It’s not just a defence thing. In fact, the perception that weapons are ‘defence or attack’ is old-fashioned,” Hult told The Local.

“There is no static front these days. Modern Russian doctrines say that if war starts then they will strike at depth into any enemy territory.”

Green Party member Peter Rådberg added that the proposal had not yet reached the hands of the defence committee, and that he imagined it would only pass if the Alliance won the elections in September.