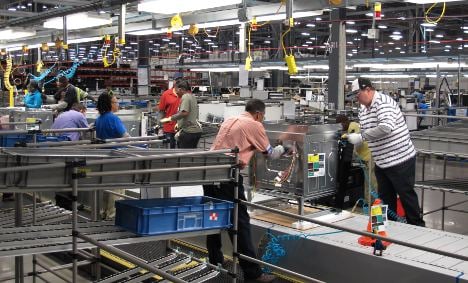 The company bounced back from losses at the end of 2013 to post a 19 percent rise to 431 million kronor ($65.5 million, 47 million euros), far ahead of a 120-million-kronor forecast by analysts polled by Dow Jones Newswires.

"Following a long period of market decline, European demand for appliances improved during the first quarter of 2014," chief executive Keith McLoughlin said in a statement.

"The work to restore profitability in Europe and to reduce costs is now gradually impacting the financial performance … The market has stabilized and demand increased in several major markets, such as Germany, France and Italy."

The group added that severe weather conditions in North America hit sales there but that there was a "strong volume rebound" during March and an expected rise in demand during 2014.

In the final quarter of 2013, the group announced a 987-million-kronor drop in profits, the first quarter that the group had been in the red since 2009. Overall, last year net profits fell by 72 percent to 672 million kronor.

In October, Electrolux announced 2,000 job cuts, with a factory closure in Australia and staff cuts in Europe.  However, the group said it would continue to invest in the Asia-Pacific region following the 2013 opening of a new refrigerator factory in Rayong, Thailand, and the launch of a new range of products in China.