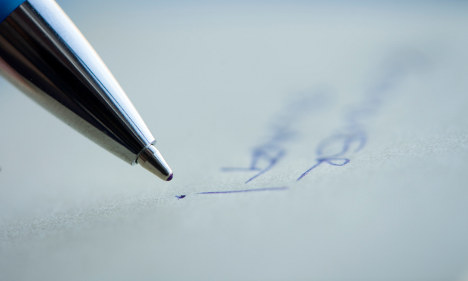 File photo: Fredrik Sandberg/TT
Average Svens nationwide are contacting the Swedish Patent and Registration Office (Patent– och registreringsverket – PRV) in droves to have their new names officially recognized.
Officials pointed out on Monday that the trend was growing. Last year, around 8,300 people applied to swap names compared to 7,900 the year before.
"When I started working here in 1997 the number was around 4,000," Mattias Benke, case officer at PRV, told the TT news agency. "It's been a strong increase."
Benke added that while Swedes were often changing their last names to match a name in their family history, he had also seen a load of what he believed were made-up names, including Blackkatt, Falkmark, and Oxstark. All of these names were approved this year.
A more liberal approach to changing names has become a growing trend in Nordic countries, but Sweden has still been a few steps behind countries like Denmark, where people can take the name of their unmarried partner. In Sweden, couples have to be married to share a name.
Case officer Benke assumed that the number of applications would increase again next year when the rules change anew. In 2015, Swedes will be able to change their name to match another family's surname, providing there are more than 2,000 people with that name.