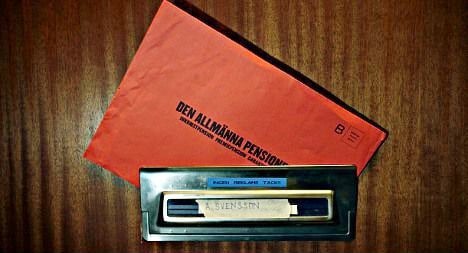 The annual "Orange Envelope" which tells Swedes what their pension will be. File: TT

Young Swedes, women, and low-income earners showed the most distrust in the Swedish pension system when polled by researchers at Gothenburg University's School of Economics.

"In general, trust in the pension system is low," economist Jeannette Carlsson Hauff said in a statement. "As many as 80 percent of the survey respondents don't think the pension system will give them an adequate income level the day they stop working."

Sixty-four percent said they did not think the government had set aside enough money from the state budget for pensions. The pension system was reformed in the year 2000.

More than 900 Swedes took part in the survey, which showed that certain groups felt more vulnerable than others did.

"Young people in general have lower confidence in the pension system, while the group with a high level of confidence has more men and more high-income earners," Carlsson Hauff said.

Many respondents overestimated how much money they would get when they retire. Fifty-six percent had hopes for their future pension that won't be satisfied at their current income level and within the current system.