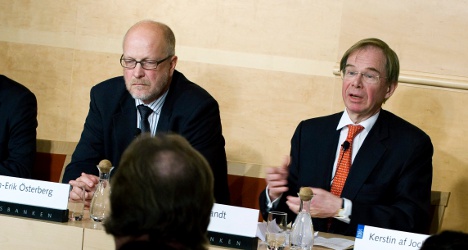 The Nobel Prize-winning economist took to his New York Times column last week to explain why he thought Sweden had gone from "role model" and "rock star" to making policy dominated by "sadomonetarists".

The issue at stake was the Riksbank's decision in 2010 to raise the repo rate at what Krugman considered to be the wrong time.

"Sadomonetarism is an attitude, common among monetary officials and commentators, that involves a visceral dislike for low interest rates and easy money, even when unemployment is high and inflation is low," he wrote.

The Swedish Riksbank's Governing Board Chairman Johan Gernandt said he did not accept that description.

"Not at all," he told The Local on Tuesday. "I think it's an unfair statement just to make headlines."

Gernandt and the Riksbank Governing Board Vice Chairman Sven-Erik Österberg penned a reply to Krugman that was published by the New York Times on Monday.

"We object to Paul Krugman’s claim that as a consequence of monetary policy mistakes, Sweden has been caught in a spiral of stagnation and deflation and thus 'turned itself into Japan'," they wrote.

Why respond to Krugman in the first place?

"We were of the firm opinion that he was not fair in his criticism, that his choice of words was not justified, and that he was actually misleading his audience," Gernandt told The Local on Tuesday. "Regretfully, the number of words we were allowed to use in the New York Times was very limited, but we hope the message has been delivered."

The duo's letter explained that the Swedish economy was actually doing rather well.

"Swedish gross domestic product growth in the aftermath of the crisis has been strong, increasing 1.5 percent during 2013 (and by 3.1 percent in the fourth quarter)," they pointed out. "Paired with a continuing increase in employment, this can, in our view, hardly be described as a stagnating economy."

Gernandt said it was "quite rare" that he and Österberg together would weigh in on public debate.

"In our opinion, this (letter) was necessary for an international audience to point out that the Swedish economy stands strong," he told The Local. "It's one of the strongest countries in Europe as a matter of fact."