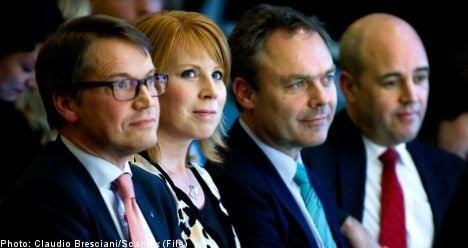 A new Ipsos surveyed published in the Dagens Nyheter newspaper (DN) showed that the four coalition parties have 36.6 percent of voters' support.

"There have been several important political events during the survey period, such as the spring budget, the crisis in Ukraine, and the Moderate Party's national meeting, but none of this appears to have helped the Alliance parties," Ipsos analyst Johanna Laurin Gulled told DN.

"Quite the opposite as the Alliance got the worst number we've ever seen in our polls."

The opposition, informally made up of two left-wing parties and the greens, now leads the field with 52.5 percent of voter support. The Alliance trails the RedGreens with 15.9 percentage points – the widest gap since 2008.

Just a year ago, the gap between the two blocs was only half as wide.

"It's a significant difference and quite clearly a worse situation than the last elections," Laurin Gulled added.

The bloc-less Sweden Democrats received 7.6 percent of voter support in the new survey, while upstarts Feminist Initiative has now reached 2.3 percent. Swedes head to the polls in September.