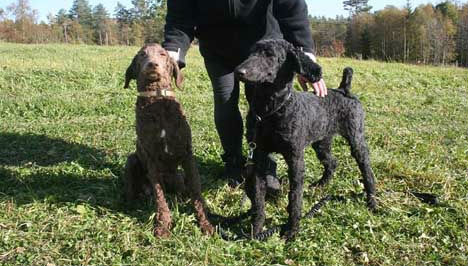 Two of the dogs which found new homes after a successful Facebook appeal by the Jönköping police in 2013. Photo: Polisen

Officers with the Kronoberg police force decided to embrace Facebook after previously advertising in local newspapers.

"We get a wider range like this…we wanted to try something new," said Margareta Friberg of the Kronoberg police told Expressen.

She added that the police force were inspired by seeing other stations around the country using the same method.

Last year police in Jönköping used Facebook to find owners for 28 poodles who were taken into custody after being found in a battered state.

Within a few days all 28 poodles had found new homes.

The Kronoberg police put up four pictures of rescued animals describing them as "nice and friendly." Within a short period of time the pictures had a large number of shares on Facebook, and one of the dogs found a new home almost immediately.

Prices vary for the dogs with mixed breeds going for around 2000 kronor ($308) and pedigree dogs costing more. However, the authorities said finding suitable homes and not cashing in on the animals was the objective of the Facebook exercise.

Friberg added that pedigree dogs can cost up to 20,000 kronor, but that they wouldn't be expecting prospective new owners to pay anything like that figure to acquire one of the canines.

Following the Facebook appeal success in Jönköping and now Kronoberg, other police forces across the country are considering doing the same thing.