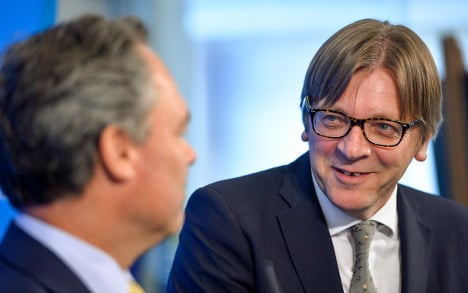 Verhofstadt with Sweden's Liberal Party head Jan Björklund. Photo: TT
Guy Verhofstadt, the 61-year-old MEP who heads the Alliance of Liberals and Democrats for Europe (ALDE) in the European parliament, spent Monday in Stockholm and Uppsala campaigning ahead of the EU elections later this month. And he says it's no surprise that European voters are disillusioned.
"They find that Europe has badly managed the crisis over the last five years. You cannot contradict them," he told The Local on Monday.
Europe, he said, still had not exited the financial crisis while the rest of the world was now in the clear. He pointed to figures that showed an average economic growth of 5 percent in Asia, around 4 percent in Africa and Latin America, and 2 percent in North America.
"Yet we are still in crisis," he added.
The politician, who served as Belgium's prime minister between 1999 and 2008, claimed Europe's entire crisis strategy was "badly managed" over the last five years.
He said he would never have run a one-track policy of fiscal discipline, but would have launched a two-pronged attack with an additional growth strategy, something he said was sorely missing from European politics.
"This Europe doesn't work and we need another Europe. The other Europe can't be one where we have only fiscal discipline and certainly not a Europe where we plan to emerge from the crisis by doing deficit spending like the socialists are promoting," he elaborated, killing conservative and socialist policies with one stone.
The socialists' chances of presidency are in the hands of German MEP Martin Schulz, with the European conservative group headed by former Luxembourg prime minister Jean-Claude Juncker. The Greens, meanwhile, are headed by Jose Bove and Ska Keller.
The liberals, he argues, provide the "clear alternative".
Currently, the European People's Party has the most seats in the European Parliament with 273, followed by the Social Democrats with 196, the Liberals with 83, and the Conservatives and Greens with 57. He doesn't need a majority if a parliamentary majority support him. In 1999, for example, the  socialists and the conservatives threw their weight behind the commission's last liberal head, Romano Prodi, who served until 2004.
The Belgian politician said he hoped a strong focus on economy would be enough to get him the top spot. He mentions a speedier banking union, unified capital markets, and a launch of future bonds.
In Stockholm, where he was joined by Liberal Party MEP Cecilia Wikström and party head Jan Björklund, he announced that his commission would be gender equal, but declined to call himself a feminist.
Another issue in Europe, he admitted, was the creeping tide of nationalism. In France, opinion polls have suggested that the National Front could take one in four votes in the European parliament elections – enough to make them the leading French voice in Brussels and Strasbourg, the twin cities of the parliament.
So how would the Belgian's leadership attack the rise of the nationalists?
"We need to answer them and say to people – Sorry, we understand that you feel fear. That you fear the crisis, fear the globalized world, but to resolve these problems, the worst recipe is to retreat behind the national borders," he said.
"All these problems we are facing, migration flows, toxic products coming from the other side of the ocean, climate change – they are all transnational problems. You don't solve them on the national level," he said.
"They're saying if you retreat behind national borders then these problems will disappear. That is a lie. We have to have the guts, us pro-Europeans, to fight against this."
Europe heads to the polls between May 22nd and 25th. A debate between the top candidates, to be televised by the European Broadcasting Union, will be held on May 15th.